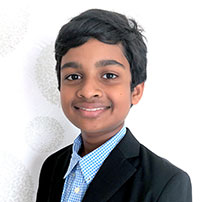 
Advaith is a thirteen year old boy living in Singapore with his mother, father and sister. He published his first book, The Neighbourliens at the age of twelve. Advaith donates all his earnings from book sales to the underprivileged and needy. Currently he is writing the second book in The Neighbourliens series and a realistic fiction book. Advaith the Speaker Advaith is an International Youth Ambassador(IYA) with International Youth Leadership and Innovation Forum (IYLIF). In 2017, he was one among the twenty IYAs selected from a pool of over 160 aspiring youth leaders from around the world. The selection was based on the speech, uniqueness of the vision and the leadership qualities. In the IYLIF 2017 conference, he gave an inspirational speech ?How can you fulfil your dreams and goals?. Advaith Vasudevan | Author | Speaker | Illustrator | Student Advaith has played an active role in Model United Nations. He was selected for prestigious titles such as Secretary General, Ambassador of various countries, MUN Committee Chair and delegate during his four years of active participation in school and international MUN. Advaith is an inspirational speaker who speaks to both adult and young audiences. He has spoken to audiences in three countries. Advaith the Illustrator Advaith likes to draw. His favourite genres are cartoons, sketches and caricatures. He was in the panel of illustrators in The Kidz Parade Edutainment Magazine from 2013 to 2015.