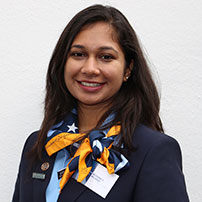 
Marvel is a 21 year old young woman who is passionate about building her community.Marvel is an Amnesty International online activist .she Contributed to Amnesty?s online decoders research to identify and analyze racist, sexist and abusive tweets against women thereby helping to create a massive database of examples of online abuse against women. As coordinator of activities for Thriving Youth Leaders Initiative ,she Organized an awareness campaign on child labor at a local radio station and local markets in Soa community. She also led a visit to the Government primary school soa to educate the pupils on the importance of environmental hygiene on world no litter day.She equally organized a campaign on menstrual health and distributed pad to young women in Soa local community and Mobilized volunteers for blood donation and clean up at a hospital In her locality.She won the NGOs award for Most outstanding leader for her work.She is also a member of Leap girl Africa and participated in the sensitization campaign of 16 days of activism against gender based violence and a Seminar on the ills of gender based violence.She volunteered for GreenPeace Africa, advocating for environmental protection.she equally volunteered as a translator for the International youth Fellowship(IYF)world camp, Translating from french to English for English speaking participants of the world camp.She is the external relations officer of Youth Empowerment for Socioeconomic Development and was an Invited speaker at the career orientation event organized at 3 local secondary schools in Yaounde. She is a member of the Young African Leaders Network and was the Vice President of her University?s Commonwealth Student Union.She is currently a United Nations Volunteer working with Unicef as a Youth Advocate for Child Protection.