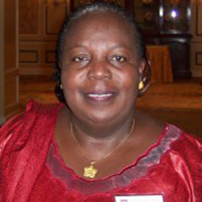 
In 1985 Mongella became Vice-Chairperson to the World Conference to Review and Appraise the Achievements of the UN Decade for Women. In 1989 Mongella was Tanzanian Representative to the Commission on the Status of Women. From 1990 to 1993 she was a Member of the Trustee to the United Nations International Research and Training Institute for the Advancement of Women (INSTRAW). From 1991 to 1992 President Mongella was Tanzanian High Commissioner to India, in 1995 she was UN Assistant Secretary General and Secretary General, Fourth World Conference on Women on Women in Beijing, China, from 1996 to 1997 Mrs. Mongella was UN Under-Secretary and Special Envoy to the Secretary General of the United Nations on Women?s Issues and Development. In 1996 she was a Member of the Advisory Group to the Director GeneralUNESCO for the follow-up of the Beijing Conference in Africa, South of the Sahara. Also in 1996 she was a Member of the Board for the Agency for Co-Operation and Research in Development in London. In 1996 she was a member of the board for both The Hunger Project in New York City, and the UN University in Tokyo, Japan. Also in 1996 she was President of Advocacy for Women in Africa. In 1997 Mongella was Senior Advisor to the Executive Secretary of the Economic Commission for Africa on Gender Issues. In 1998 she became a member of the OAU sitting on the Women Committee for Peace and Development, In 1999 she was a member of the ?Council of the Future?, UNESCO, Paris, France, in 2000 She was a Member of the Tanzanian Parliament Ukerewe Constituency. In 2002 she was a member of the OAU?s High Level Advisory Panel of Eminent Persons. In 2002 Mongella was a member of the Regional Reproduction Health Task Force for the World Health Organization?s African Region, she was also leader of the OAU Election Observer Team to the Zimbabwean Presidential Election. 2003 saw her as Goodwill Ambassador for the World Health Organization?s Africa Region. She became a Member and President of the Pan African Parliament in 2004.[5] In 2005 the University of Georgia awarded her the Delta Prize for Global Understanding.[6] She was designated Chairperson of the International Advisory Board of the African Press Organization (APO) in February 2008. Mongella is member of the World Future Council