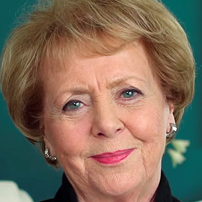 
Vigdis Finnbogadottir is the legendary and historic ex President of Iceland and the only female leader to be the longest-serving elected female head of State of any Country. President of Iceland for four terms and sixteen years from 1980 to 1996, she was the world’s first democratically directly elected female president. She was earlier also the Artistic Director of the Reykjavik Theatre Company (Leikfélag Reykjavikur). After her popular and successful term concluding in 1996, she became founding chair of the Council of Women World Leaders at the John F. Kennedy School of Government at Harvard University. She was soon also appointed President of the UNESCO World Commission on the Ethics of Scientific Knowledge and Technology. Fru Vigdís Finnbogadóttir had a beautiful motto as: ‘Never let the women down’. She worked tirelessly to promote girls’ education. Frú Vigdis Finnbogadóttir has be honoured with sixteen honorary doctorates from leading universities in Europe, Japan, Nordics, UK, US and Canada. Fru Vigdís Finnbogadóttir is a member of the Club of Madrid, an independent non-profit organization composed of 81 democratic former Presidents and Prime Ministers from 57 different countries.