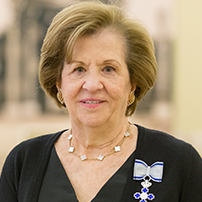 
Catherine SOFIANOU is the President of the SofMedica group of companies, an acknowledged high-end healthcare technologies & services provider in South Eastern Europe with major head offices in Athens ? Greece and Bucharest ? Romania. She is a mother of two and besides Greek, Catherine Sofianou speaks English, French, German as well as the Arab language. She was born in Cairo Egypt as the youngest member of a Greek family with origins from the coasts of Smyrna (nowadays Turkish Izmir). She moved to Greece in 1963 where she got started her 40-year international business by putting up together with her husband Pandelis an Athens-based trading company that started up as an exclusive importer of high-end products from Western Europe to Greece and Northern Africa. In the early ?90s, Catherine Sofianou saw the opportunity in the healthcare field in South Eastern Europe and had the courage to seize it: she incorporated in 1994 in Bucharest ? Romania a company specialized in high-and medical technologies from the United States which nowadays takes pride in having first introduced several innovative therapies in the whole region such as the Artificial Heart and the Robotically Assisted Minimal Invasive Surgery. Today Catherine Sofianou is splitting her time between Bucharest and Athens being head of the family-owned group of companies occupying more than 100 healthcare professionals based in 4 different countries (Romania, Greece, Bulgaria & Cyprus). Still she finds the time and the enthusiasm to contribute to the activity of a number of social not- for-profit organizations. In May 2005, the ?Renasterea Foundation? awarded Catherine Sofianou with the title of Member of Honor, for her constant contribution in the project fighting breast cancer. In March 2006 the Princess of Thailand awarded her with the title of Honoree of ?The Leading Women Entrepreneurs of the World? , in Bangkok, Thailand while in the same year H.E. the Ambassador of Greece in Romania granted her the Community Award. In November 2010, she was awarded by The Academy of Romanian Scientists the Certificate of Excellence for the overall contribution of her group of companies in the progress of medicine and science in Romania. In February 2013, she was made Knight of the Order of the Crown of Romania by His Royal Majesty King Michael I of Romania for her professionalism in leading one of the famous Romanian companies in the healthcare field in Romania and for her generous contribution to philanthropic activities in a ceremony which took place at the Peles Castle in Sinaia. On April 25, 2015, Catherine Sofianou received from the Pope and Patriarch of Alexandria and all Africa, Theodore II the greatest honorary distinction this far, the Cross of Archontisa Ekklision for her overall contribution to the healthcare field and not only. On November 25, 2016, she also received the Grand Cross of Saint Sabbas the Sanctified from the Pope and Patriarch of Alexandria and all Africa, Theodore II. Following this, on November 27, 2016, the Greek Community of Cairo, during its meeting of the Board of Directors decided to name Catherine Belefanti-Sofianou ?Great Benefactor?, according to article 46 of its Statute. In December 2016, she became Honorary Member of the National Society of Greek Authors, further to a decision of the Board of Directors of the Society for her contribution to the dissemination and promotion of Greek literature and culture abroad. On March 30, 2017, Catherine Sofianou was awarded an honorary plaque by Prof. Manolis Varvounis of the Democritus University of Thrace for her overall contribution at the dissemination of Greek language and culture in Romanian. On October 25, 2017, she received on behalf of His Majesty King Michael I of Romania the Cross of the Royal House of Romania for her generosity, discretion and deepness with which she has been supporting for years the social projects of the Foundation Princess Margarita of Romania and the initiatives of the Royal Family for a stable and dignified Romania. On November 26, 2017, Catherine Sofianou was awarded the Prize of Beneficence by the Charitable Brotherhood of Men of Thessaloniki for her contribution to the community, the Church, education and culture. On February 8, 2018, she was awarded an honorary distinction by the Hellenic-Romanian Chamber of Commerce for her contribution to the promotion of Greek culture and education in Romania. Catherine Sofianou received the title of honorary member of the Department of Modern Greek Philology of the School of Foreign Languages and Literature of the University of Bucharest on April 19, 2018, for her contribution in supporting the activities of the department. The ceremony took place during an event at the Law School of the University of Bucharest. Also, on December 3 of the same year she received the Special Award of Beneficence from the Greek Company of Literary Translations. At the beginning of 2019, she was appointed Vice-President of the Greek Chapter of the International Friends of the Bibliotheca Alexandrina and of the Egypt ? Greece Friendship League. In October 2019, the Pope and Patriarch of Alexandria and All Africa, Theodore II, granted her the title of ?Ambassador of Greek Diaspora? along with the pastoral staff for her major and tireless contribution at the thorough renovation of the Saints Constantine and Helen Greek Orthodox Cathedral in Cairo. The ceremony took place during the inauguration of the cathedral after its renovation. The same month, she also received the Cross of Alexander the Great from the Director of the Bibliotheca Alexandrina, Dr. Mostafa El Feki, on the occasion of the Annual Meeting of the Friends of Bibliotheca Alexandrina in Alexandria, Egypt.