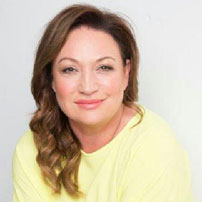 
Norah Casey , Author , Harmonia Publishing She is currently working on a range of television and radio projects and until recently co-anchored Newstalk Breakfast. Formerly a Dragon in Dragons? Den, she presented a six part series, The Takeover, for RTE 2 in 2013 and co-hosted RTE?s Today show on Friday?s with Bl?thnaid N? Chofaigh. She is CEO (and owner) of Harmonia which prints over four million magazines annually for the Irish, British, US market and more recently in China. Harmonia?s stable includes strong women?s brands: Irish Tatler, U, Woman?s Way and www.ivenus.com; and specialist titles like Food&Wine, Auto Ireland and Ireland of the Welcomes (aimed at the Irish Diaspora). She is a founder of the London-based Women?s Irish Network.