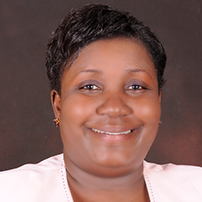 
Is a Member of Parliament in the Tanzania National Assembly for 2015-2020, She has worked with civil society sector in Tanzania for more than 20 years fighting for women and girls rights. She holds a Bachelor Degree in Development Studies. He is a committed women practitioner, gender activist/analyst and a global women leader in Parliament and out of parliament. She holds one important global award i.e. Emerging Women Leader of the Global South-Coady International Institute/CIDA Canada-2012/3. 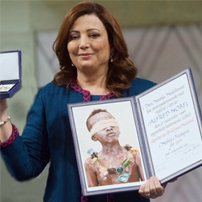 
Ouided Bouchamaoui is the co-laureate of the Nobel Peace Prize 2015. Elected President of the Tunisian Confederacy of Industry, Trade and Handicrafts (UTICA) in May 2011, first woman elected to this position in the Arab World, and member of the National Dialogue Quartet, she played a historic and legendary role in helping her country navigate through a great time of crisis during the Arab spring and move Tunisia to a more transparent and collaborative society with democratic processes, constitutional framework and transparent elections. In 2013, under her presidency UTICA along with the Tunisian General Union of Labour (UGTT) launched the initiative of the National Dialogue. They were joined by the League of Human Rights and the Tunisian Order of Lawyers, forming ?The Quartet?. The Quartet initiated negotiations with all parties involved in deep political crisis in Tunisia, resulting in a peaceable solution. For this successful endeavor they were awarded the Nobel Peace Prize in 2015. Ms. Bouchamaoui is also Member of the Oslo Business for Peace Award Committee since January 2016. Ms. Bouchamaoui describes the open secret of her success as the ability to build win-win partnerships and relationships even among opponents. She is an exemplar of the creative and constructive force of women?s leadership to nurture dialogue, bring harmony and build peace. As businesswoman, Ms. Ouided Bouchamaoui is a shareholder and an administrator of the Hedi Bouchamaoui Group, a family owned business spanning more than a hundred years. Mrs. Ouided Bouchamaoui declined thrice the offer to become Prime Minister, wishing to retain her independence, and to work as a mediator to achieve social stability and help foster economic development in Tunisia. In January 2015, the Tunisian President, Mr. Beji Caid Essebsi made her Grand Officer of the Order of the Republic, and His Majesty, King Carl XVI Gustaf of Sweden, decorated her with the Royal Order of the Polar Star in November 2015. She also received in December 2015, the ?Legion d?Honneur? from the French President, Mr. Fran?ois Hollande. At the Annual Women Economic Forum (WEF) 2018 in India, she will be felicitated with the highest WEF Award of ?Legendary Peace Leaders of the Decade.?